Ride for the Foundation FUNdraiser

Ride for the Foundation FUNdraiser 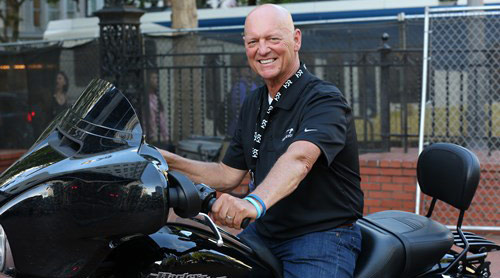 Since 2014, Steve Grandon has been riding his Harley across the county, raising money for ROW education.  We caught up with the founder of this unique event after his seventh ride.

Steve, you created the FUNdrasier event in 2014.  How did you come up with the idea?

In 2014 our conference was held in Hartford, CT.  Realizing the 2015 conference would be in San Diego, I tried to recall when we had back-to-back conferences that far apart.  I thought how cool it would be to ride the entire distance, basically coast-to-coast, on the bike.  I had never done that, so I sort of looked at it as a challenge in itself.  I began thinking of a way to combine two things I really enjoy – the IRWA and motorcycles.  I wanted to somehow connect the conference sites with a cross-country bike trip.  Knowing how many of our members work so hard and make such an effort to raise funds for RWIEF, I came up with the FUNdraiser ride which I thought would be a unique way to raise a little more cash for the cause.

Fast forward to 2020.  Tell us about this year’s ride.  What hurdles did you face?
This was my seventh FUNdraiser ride, and I gotta tell ya, it sure felt different.  110-degree heat in Yuma, AZ, nor snow and sleet in British Columbia presented the hurdles that this year’s ride did.  You can prepare for the weather.  And you can see grizzly bears, moose, or buffalo (hopefully from afar).  But riding across multiple states while trying to avoid a global pandemic created an entirely different mindset.  I feel as though I spent more time preparing for this trip than I did when I rode from Nashville to Anchorage.  My goal was to complete the ride before the virtual Board of Director’s meeting on June 24th so Carol Croft could announce that the ride took place even though we were unable to meet in Minneapolis.  So, with the support of my employer Liberty Core, I took off the Thursday before Memorial Day weekend.  Everything from minimizing stops as much as possible, to where to stay, to how much food and beverage to pack on the bike.  As it turned out, the trip went off without a hitch.  I completed the ride in four days, with an average of ??? miles per day 😊.  Typically, with that distance, I would spend five days getting there because I would have stopped more often for pictures.  All in all, though, it was another scenic and enjoyable FUNdraiser ride that will hopefully generate a little more cash for a very worthwhile cause.

What do you hope to accomplish with this annual event?
Increased participation.  I hope to get more people involved in the contest to raise more money for the Foundation.  It’s fun to talk about the ride with others, so hopefully more people will donate as a result.  If it continues to grow, I think everyone wins.